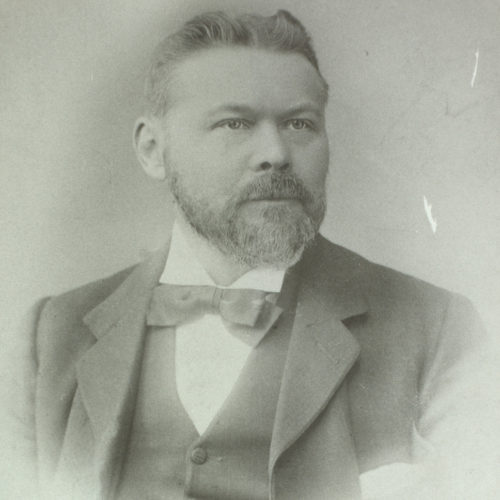 Magnus Volk was an enthusiastic inventor.  As a young man, Magnus liked to build machines and experiment with electricity. He soon became an expert in all things electrical.  In 1879 he brought the first telephone system to Brighton, installing it in his house and that of his friend, William Jago.  A year later, at the age of 29, he was the first person on the south coast of England to fit electric lights in his house.

You can see another of Magnus’s inventions in Brighton.  In 1887 he worked on the Clocktower on North Street, providing it with an hydraulically powered ball for the top of the tower.  The ball rises up the mast just before the hour and drops to chime on the hour.  The chime is no longer present, but you may still see the ball rise.

Magnus’s most famous invention was his Railways. In 1883 he decided to build a small line going along the seafront in Brighton, using electricity to power the trains. It opened on 4 August 1883 and is still in operation today, now the oldest electric railway in the world.

As soon as the Railway was up and running, Magnus was keen to take the next step and extend it further into town. Unfortunately the Corporation would not give him permission to do this, so he extended the line to the east instead.  As it continued to grow in popularity, new carriages were added to the service to increase capacity.

In 1901 the line was extended again, this time out to Black Rock.  By this time the route was now 1.25 miles in total.

A more detailed history of the Railway and the train carriages can be found at www.volkselectricrailway.co.uk

By 1892 the Railway was up and running successfully, so Magnus turned his attention to his next challenge; extending the line towards Rottingdean.  Steep cliffs stood in his way, so he decided to build a line that would run through the sea.  The train carriage sat on stilts above the water, earning it the nickname ‘Daddy Long-Legs’.

Pioneer first ran on 28 November 1896, but sadly did not last long.  A storm a week after the launch caused extensive damage, and it looked like it might be the end of Pioneer.  However, the remains were salvaged and carefully repaired, and Pioneer was back up and running in July 1897.

In 1900 Magnus was informed that the Railway would need to move to allow for new sea defenses.  This would have meant moving it into deeper water, which simply wasn’t viable.  The line was closed and Pioneer was abandoned.